Today I went to Albemarle High School to volunteer at CoderDojoCville. I wasn’t exactly sure what it was going to be like but I had a good time. There were two sessions (9-12, 1-4) with students from about 2nd grade to 9th grade were there doing a number of activities, some which were new to me. I was familiar with using 123D Design, Scratch and Arduinos, but some kids were using Kodu and some music program that I can’t remember the name of. There were also kids making wearable circuits out of felt and wire as well as a group of kids who were 3D printing their designs from 123D using two MakerBots that were set up in the library. I enjoyed walking around and talking to some of the kids, and they were more than eager to show me what they were doing. One student ev 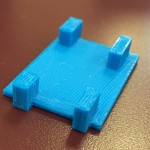 en said “it’s nice to have someone to talk to about what I’m working on.” That made me a little bit sad, but he was having a really great time working with his friends to create a Scratch program where he made a working boom box.

One little girl that I worked with in the morning session on the Arduino and 123D wasn’t able to come back the next day, so I made sure that her little table was printed in the afternoon and will deliver it to her elementary school this fall. I found out that another boy, who is also the 3rd with his name like I am, lives in my neighborhood and plays with my next door neighbors. In the afternoon, I got 4 little 2nd grade ESL students absolutely hooked on Arduino (which I will be buying for my nephew for Christmas). It was a rewarding day watching kids make and create all day with technology that is free to them (save for the Arduino boards and the MakerBots). I’m happy to be a part of a group of educators who provides experiences like these for kids. Hopefully some of these students grow up knowing how to think creatively and problem solve effectively as a result of experiences like this when they were young.