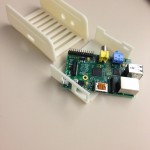 I finished printing my case, version 1. It has not been too successful. Nigel watched me try to shove the Pi into the base of the case but the holes don’t seem to be big enough. He suggested using a razor blade to make the holes bigger for the HDMI port. In Tadge’s presence, I later tried to put it together with the top of the case first. That seemed promising, but when I tried to put the two pieces together, I ran into the same problem.

Tadge then tried to make some adjustments and broke the case. It just snapped in a little spot by the Ethernet and USB ports, so not a big deal, but it cracked nonetheless. He was busy with his pocket knife trying to shave some edges to make things fit better, but was then directed to build a telegraph key for Courseware tools.

I knew I was going to have to print another case and that this design wasn’t going to be the best thing for me (because I need to have slots for the camera and other sensors), so now I’ll start looking for another design before I try to design my own.